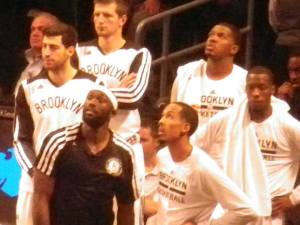 Never thought I’d say it, but this team is missing their 1-2 records from weeks 1-3 of the season.  0-4 this week, a 3-10 record for a team many thought wouldn’t lose more than 20-25 all season, and a fight for last place in the Atlantic with the Knicks. Or just like we all saw this season going for New York area teams.

Kevin Garnett thought he was 27 again, hitting his first 5 shots in the 1st quarter for 10 quick points after Saturday night off.  The entire offense shined in the first 12 minutes, scoring a season high 40 points in the frame.  But unfortunately for Brooklyn, the defense never showed up, and their hot start came to a halt just as quickly as it came.  Without Brook Lopez down low, Portland quickly learned to defend from 12-feet out, because there was no paint attack for the Nets last night.

Brooklyn couldn’t defend the 3, allowing Wesley Matthews to go 4-4 in the 1st quarter.  The Trailblazers as a team to shoot 44% from 3, and an obscene 54% overall.  Brooklyn did a good job limiting turnovers and getting to the free throw line, but they only finished at 37% from the field and a poor 23% from 3.  The Nets were held to just 35 points in the 2nd half.

If all those numbers weren’t troubling enough, this team lacked any kind of leadership in the 2nd half.  Timeouts were taken at strange times, there didn’t seem to be any talking on defense and Jason Kidd continues to just sit on the sidelines doing nothing.

Big shocker, they played poorly in the 3rd quarter and Deron Williams re-injured his ankle.  Down just 3 at the half, Brooklyn was outscored by 10 in the 3rd quarter where they allowed one of their 2 30 point quarters on the night.  They lost their point guard again, when Williams landed awkwardly on the foot of Bobcats point guard Kemba Walker after a late 2nd quarter jump shot. Williams took and made a pair of free throws, but was then immediately removed from the game and didn’t return.

The defense had no answer for Walker, who went for 31 including 2 clutch free throws to ice the game in the final seconds.  Neither team was great from the charity stripe, with the Nets leaving 7 points to the Cats 13 on the line.

For the amount of effort Brooklyn showed on Friday, they should’ve stayed home. No Lopez, Williams, Terry or Kirilenko again, and it showed quickly. By the end of the 1st quarter, the Timberwolves had a double-digit lead at 30-14.  Minnesota’s lead grew to 20 by half, and by the final buzzer, the Nets fell by their biggest margin of the year, 30 points.

All five of the Wolves starters finished in double figure scoring, including a double-double for Kevin Love, who had his way down low without Brook Lopez on the floor.  Brooklyn managed to get 4 in double figures as well, but had 20 turnovers to their 31 made field-goals.  Shaun Livingston had his worst game of the year in place of Deron Williams, tallying no assists and just 1 point.  The play of Mirza Teletovic was probably the only positive.  The second year forward pulled down 7 boards and score 7 points in 15 minutes of action.

Down 4 after 1 quarter, Brooklyn had one of their best offensive quarters in the 2nd, putting up 32 points.  Now stop me if this sounds familiar.  The Nets held a lead at the half, and then squandered it in the 3rd quarter.  A third straight day without Lopez, Williams, Terry and Kirilenko meant using their entire bench again.  And without their all-star big man, the defense in the paint continues to suffer, with the Pistons outscoring them 20-0 in the paint in the 3rd quarter alone.

Their lone healthy and not limited starter, Joe Johnson, did his best to save the Nets from their 4th straight loss. The shooting guard was on the floor by far the most, scoring almost at will, scoring a season high on 12-of-18 shooting, while dishing out 4 assists to no turnovers.  Greg Monroe and Brandon Jennings both tallied double-doubles for Detroit, who out-rebounded Brooklyn, as well as forced nearly twice the amount of turnovers than they committed.

There continues to be little rhyme or reason to the distribution of minutes, and I never know when certain guys are going to come off the bench.  Some of this has to do with the recent rash of injuries to their starters, but a lot goes back to age and a lack of playing time together.  What I take away from this teams first 12 games is they need to play better pick-and-roll defense, as well as help defense, and they need Lopez back. He is the key to this team’s success.  Sure there’s depth body wise in the front court, but not enough scoring wise.  They need their lone all-star from a year ago to be healthy, and they need KG to be more consistent on the offensive end. If they can at least get one of those two things to go with an effective Blatche and Plumlee coming off the bench, they can survive (for now) without Williams.

Now the Nets look to be thankful for some much-needed wins this holiday week.  4 games and it all starts up north Tuesday in Toronto, then a Wednesday date back home with the Lakers.  The weekend caps off with a match-up with Dwight Howard in Houston on Friday and wraps up in Memphis on Saturday night.