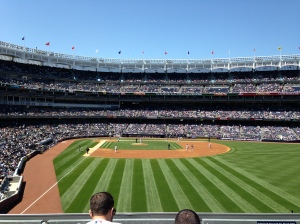 June saw the New York Yankees win just two of their eight series (sweeps of the Mariners and Blue Jays), while squandering great opportunities to win more than that.  We’re exactly halfway through another season, and there are still many questions about this team, especially after a very bad month.

But the Ace of the staff isn’t one of them. Masahiro Tanaka is a winner, plain and simple.  The rest of the rotation has been pretty solid as well, though it’s starting to taper off here as we begin July.  Not to mention how good the bullpen has been. Another plus is that there haven’t really been new additions to the injury report this month.  Mark Teixeira made his return on June 3rd against the Athletics.  He drove in 2 runs, including a go-ahead solo homer batting right-handed. It looked like hitting from the left side would remain an issue, but as the month went on, the wrist became a non-issue.

With all that being said, this team is so inconsistent, particularly the offense.  Teixeira is the only power threat, Jacoby Ellsbury seems to have two hot weeks, followed by two very cold weeks and Brian McCann hasn’t really shown up yet. This team needs more from their off-season acquisitions.  Derek Jeter has been on and off, and the same can be said for Brett Gardner.  This team needs Gardner and Ellsbury on base to utilize their speed.  They can make things happen, small-ball is just as, if not more important as the ability to get that 3-run home run.

Best Starter: Masahiro Tanaka – He’s going to win this thing every month because he could be the CY Young award winner in the American League this year.  At 11-3, Tanaka continues to strike out double-digit batters with ease.  Losing streaks with this guy in the rotation won’t go past 4 very often.  Look for him to start possibly start the All-Star game.  He’d be closer to 13-14 wins right now if not for the low run-support he’s been given.

Best Reliever: Dellin Betances – May clearly wasn’t an anomaly.  Betances continues to strike out opponents in 3 or 4 pitches, which allows him to go two innings, AND still be available the next day.  He’s confident, yet humble and cool under pressure.  Like I said last month, this is Rivera in 96 type stuff.  He looked a bit shaky late in the month, but found ways to get out of jams, and that’s all you can ask of a guy.

Best Hitter: Mark Teixeira.  His batting average is hovering around .240 again, but he’s the Yankees only real power source, and almost every big hit this month came from via the switch-hitter.  If only he’d finally figure out how to hit against the shift.

Biggest Surprise: Chase Whitley.  Another month of solid performances and I probably can’t call him a surprise anymore.  He’s doing everything you’d want out of a 4th-5th starter.  He’s giving the Yankees decent length, and he’s staying away from the big innings (for the most part).

The American League East will be a fight for a while, with no one looking like they want to run away with it.  The Blue Jays came back down to earth a bit here.  But if the Yankees continue to do what they’ve done, while getting healthy and guys like McCann slowly coming around, things could be worse in the Bronx.

With that being said, as we approach the All-Star break, the question becomes what do the Yankees need and should they make a splash before the trade deadline?